Marc Marquez added another chapter to his historic career on Sunday with a fifth Grand Prix world championship and his third premier class crown in four tries.

Marc Marquez took a remarkable victory at Motegi today to become the 2016 MotoGP World Champion with three races to go!

Marc got off to a brilliant start and immediately engaged in a fight for the lead with Jorge Lorenzo and Valentino Rossi. On the second lap he overtook the Italian at turn eight and began to pursue Lorenzo, taking over the lead on lap four.

He immediately showed that he had the rhythm and speed to make a breakaway, putting in a series of laps in the 1’45 range and pulling a half-second gap on his countryman. Lap six brought the first major turn of events, as Rossi fell at turn seven and was forced to retire. Marc continued stretching his lead until Lorenzo also slid off, with five laps remaining. 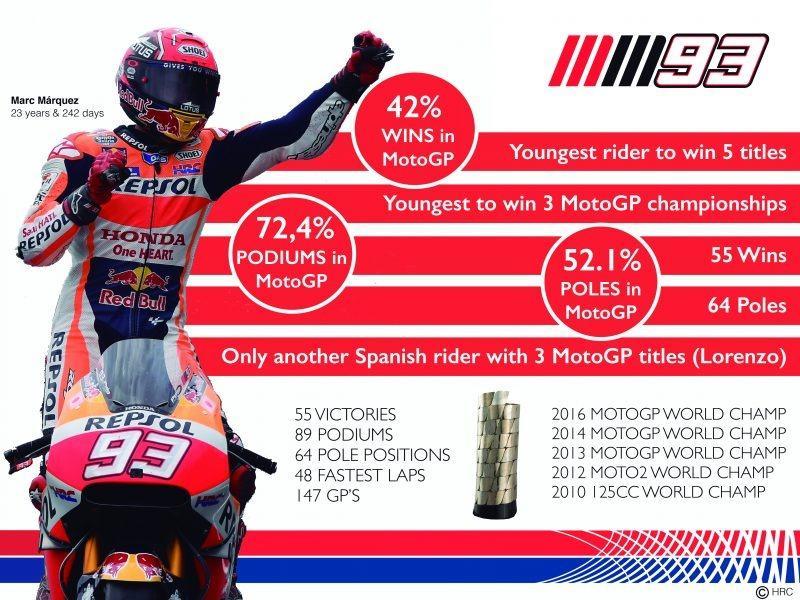 Marc is also the only rider in any class to score points at every race so far this year. Today’s victory also extended Honda’s lead in the Constructors World Championship to 28 points, and it is the sixth Honda victory in the last eight races.

2016 MOTOGP WORLD CHAMPION
“It’s incredible! Before the race I didn’t expect to be Champion, and I said that here it would be impossible. However, when I saw that Rossi was out of the race, I decided to push hard for the victory. I was riding my hardest, and when there were three laps to go, I read on my pit board that Lorenzo was also out; on that same lap, I made mistakes in four or five corners, as it was difficult to stay focused! I’m very happy because this title is very special considering some of the crashes I had last year, and also because it came at Motegi, Honda’s home. Honda has worked so hard this year, and you could see the fruits of that effort also at this track, where we’ve struggled in the past. I myself also improved during the season; for instance, I learned how to better use the front Michelin tyre. It has been a demanding year, but a fantastic one. It’s great for my team, and of course I don’t want to forget my grandmother, who passed away this year and would be very happy with this World Championship. Now we can just enjoy it and go into the last three races with maybe a more ‘Marc Marquez’ style.”

Congrats to the #GiveMe5 winner of 2016! Who showed brilliant talent through each and every race this year, it was definitely well deserved. To show you support the Champion of MotoGP 2016 make sure you get yourself some of Marquez's collection from t-shirts, hoodies, to caps and accessories! The World Champion Marquez t-shirt will also be coming soon to the site!